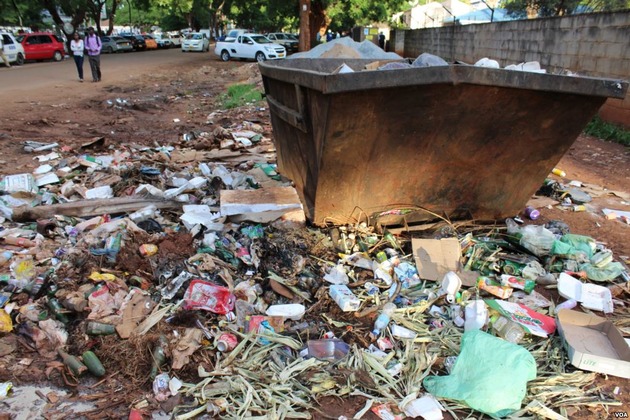 Health Minister David Parirenyatwa is appealing for international assistance, citing help the country received during a major cholera outbreak in 2008.

"When we had cholera, I called the partners and other countries came out. Yes, with typhoid we will welcome partners, particularly the usual partners like UNICEF, MSF and others," said Parirenyatwa.

The British charity Oxfam has responded, supplying water treatment chemicals to typhoid-affected areas, and deploying volunteers to educate people on ways to avoid the disease.

Zimbabwe has been hit hard by waterborne diseases before, most notably a cholera outbreak during the 2008-2009 rainy season that killed 4,000 people.

In an interview, Fortune Nyamande, the spokesman for the Zimbabwe Association of Doctors for Human Rights, said the government is

not fulfilling the right to health enshrined in the country's constitution.

'We have not seen tangible action from the Harare city council ,' said Nyamanda. ' At the central government level, what we have seen is more blame game. People should concentrate more on dealing with typhoid. It is unacceptable for anyone to lose his or her life because of typhoid. They are the diseases of the 1900's.

That is when cholera and typhoid used to kill people. People should come together and deal with the root cause of typhoid and the nation should move forward."

Typhoid, an infectious bacterial fever, can be treated with antibiotics, but still kills more than 220,000 people worldwide each year. It can be prevented through improved water and sanitation.

In Mbare township, the epicenter of the current outbreak, sewer water can be seen flowing on the streets and garbage has gone for days without being collected.

After the outbreak began, authorities banned vendors from selling food in Harare; but, seller Chenai Mananga says vending is not the cause of typhoid.

"Garbage is not being collected. Burst sewer pipes are not being repaired. It is junk all over, she said. 'If there is junk there will be disease outbreaks. So it is not vendors' problem."

In some areas, residents say faucets have been dry for days, forcing them to rely on water from open sources like lakes and rivers for daily chores. Those waters are not clean, making it harder to end Zimbabwe's typhoid outbreak.