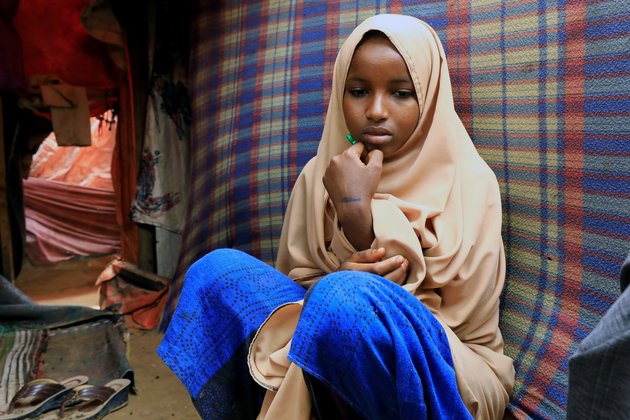 OUAGADOUGOU, BURKINA FASO - According to data from the United Nations, Africa's Sahel countries have the highest rate of child marriage in the world, with more than half of all girls being married before the age of 18.

Viviane Sawadogo, whose name has been changed to protect her identity, lives in Burkina Faso. Her family forced her into marriage at age 12. She had been promised from birth to the man's family in exchange for a child bride his family had given to hers some years earlier.

But her husband was a man in his 50s who already had four wives, and Sawadogo decided to escape what she described as a curse.

One morning, she said, she left the house and walked from 8 a.m. to 11 p.m., covering more than 30 kilometers. But she was caught and taken back to the house, feeling completely devastated. She said she was determined not to give up, however, and made another attempt. That night she walked more than 40 kilometers before finding a bus which allowed her to escape.

After her escape, she found refuge in a center set up by a church for girls fleeing child marriage. She lived there for 10 years and was able to continue her education.

Sawadogo is now a 22-year-old university student. She has left the center but returns regularly to mentor younger girls, like one who also escaped through the bush alone and whose name is being withheld.

The 12-year-old said she left the man she had been given to because she didn't love him and because he already had three wives and children. She has been living at the center for a few months, where she is clothed, fed and also able to attend school, something she said makes her very happy.

Cultural practices like "gifting" daughters to other families are common in the Sahel, as is the kidnapping of young girls for marriage.

Nonprofit groups like Save the Children are working to eliminate child marriage but say financial support and empowerment of the girls is an essential part of stopping it.

Toumani Sale Issoufou works on the issue for Save the Children in Burkina Faso.

He said they believe the reason the girls are given up for marriage is because the parents think they do not have the means to support them within the family. When a girl is given in marriage, "We have to find a way to empower her," he added.

Save the Children provides cash to families to ensure girls continue their education and also helps train the girls so they can get jobs.

Soumaila Sako from Burkina Faso's Ministry for Women, Families and Humanitarian Affairs said the country has set up more than 800 watch cells in at least 872 villages to report child marriages to authorities and has sensitized more than 4 million people on the phenomenon of child marriage.

But it is an uphill battle. Sister Veronique Kansono, the nun who runs the refuge center for girls, said the conflict raging across the Sahel since 2012 has only made matters worse.

This week alone, she said, the center welcomed four girls. There are other weeks when six arrive, which she said is too much. There are already 110 girls living at the center. She's surprised the numbers have gotten worse, rather than decreasing.

Despite the obstacles, Sawadogo said, escaping child marriage is vital. Had she not escaped, she said, her life would be miserable.