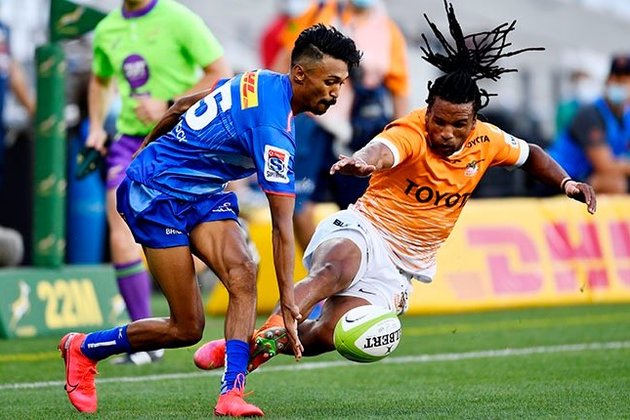 The Cheetahs upset the apple cart when they defeated the Stormers in the Cape franchise's first home match at Cape Town Stadium on Saturday.

The men from Bloemfontein won the preparation series encounter 34-33, having trailed 26-21 at half-time.

It was a match in which the lead changed hands several times but the Cheetahs deserved their victory as they finished stronger in the final quarter.

Flying winger Rosko Specman was the Cheetahs' hero with a hat-trick of tries.

The Cheetahs were first over the whitewash in the sixth minute when hooker Wilmar Arnoldi barged over after a smart breakaway move off a lineout.

The Stormers hit back soon afterwards when fullback Tristan Leyds scored under the posts in the 12th minute. It was set up by a powerful run from inside his own half from winger Edwill van der Merwe.

Specman then put his side back in front with a try in the 17th minute. It came after a magical run in which he rounded former Blitzboks team-mate Ruhan Nel.

The Stormers then hit back with three penalties in quick succession from young flyhalf Kade Wolhuter. Two of those kicks were long-range efforts and the hosts were leading 16-14 after 26 minutes.

Winger Leolin Zas then extended the Stormers' lead in the 28th minute after capitalising on a dropped ball in the Cheetahs midfield. He booted ahead, before following up brilliantly to score.

Another Wolhuter penalty in 33rd minute saw the home side take a 26-14 lead.

Specman, however, cut the deficit on the stroke of half-time with a brilliant individual try in which he dazzled through several Stormers defenders.

Straight after the interval, Specman bagged his hat-trick with another dazzling run down the touchline.

The Stormers regained in the lead when they were awarded a penalty try in the 50th minute after a powerful scrum under the Cheetahs' posts (33-28).

A Steyn penalty in the 56th minute then put the Cheetahs to within two points (33-31).

It was all the Cheetahs for the next 10 minutes and their territorial dominance was rewarded when Steyn kicked another penalty to put them in front 34-33 after 70 minutes.

A couple of minutes later, Wolhuter had the chance to put the Stormers back in the lead but his effort from halfway missed to the right of the uprights.

The Cheetahs finished the game in the right areas of the field to leave the hosts disappointed.