Effects of Jim Crow Era Live On in Modern America, Some Say 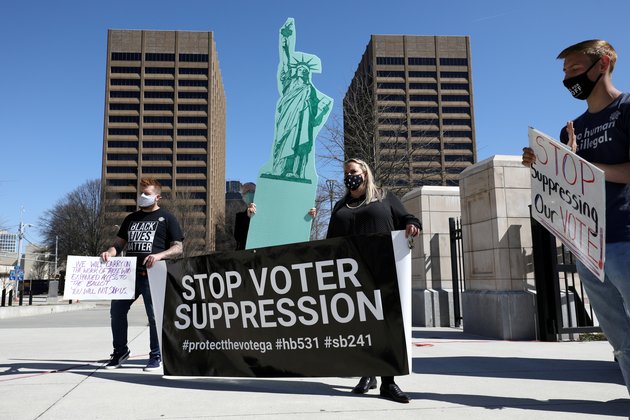 NEW ORLEANS - "My mother and stepfather grew up during the era of Jim Crow," Dontaye Carter told VOA. Carter is the head of a public relations firm in the suburbs of Atlanta and helps lead voter registration and mobilization efforts in the area.

"Sometimes, people think of that time as being ancient history, but it's not true," he said. "There are still people alive today who were traumatized by its events."

Jim Crow refers to a time in U.S. history from the late 19th century through the first half of the 20th century in which state and local laws - primarily in the Southern United States - denied equal opportunity to Black citizens.

Carter said that when he was a child, he was told about that tension-filled period - an era whose effects many believe can still be seen today.

"My stepfather told me stories about how he and his siblings would walk three miles to school because every time they got on the bus, there would be fights with white students who didn't want them to sit down," he said. "Black kids can sit down on buses today, but it isn't hard to find the inequalities in our society that still exist. Look at where the industrial plants are in the Atlanta area. All that pollution got put in the Black communities. Even that there are neighborhoods that are specifically 'Black neighborhoods' - that's all because of racist Jim Crow."

FILE - A multi-racial group of students sit next to each other on the actual bus where Rosa Parks, a black woman, refused to give up her seat to a white man in 1955 in Alabama, during their visit to Henry Ford Museum in Michigan, Oct. 25, 2005.

In the months since the November 2020 presidential election in which Democratic nominee Joseph Biden defeated incumbent President Donald Trump, state legislatures across the country - but led primarily by closely contested Southern and Sunbelt states such as Georgia, Texas and Arizona - have proposed and sometimes passed laws restricting how voters can cast their ballots.

FILE - Voters line up early in the morning to cast their ballots in the U.S. Senate runoff election, at a polling station in Marietta, Georgia, Jan. 5, 2021.

Republicans in these states have said the bills are designed to secure the election process and to make it harder to cast fraudulent votes - something judges across the judicial system deny being a problem in the 2020 election. Still, since late March, more than 360 measures in 47 states have sought to impose more stringent identification requirements for absentee ballots, limit ballot drop boxes and shorten runoff elections.

Democrats have derided these measures as another attempt by Republicans to make it harder for African Americans and other minorities - groups that tend to overwhelmingly favor Democrats - to vote. They say it steals from the same playbook that racist politicians used more than a century ago to stop Black Americans from voting.

Biden recently called it "Jim Crow in the 21st century," and other Democrats have called the attempts "Jim Crow 2.0."

To some, however, calling recent proposals a reversion to earlier, racist times is unfair and disingenuous.

"I have no doubt that the Jim Crow era in this country is still in the minds of some African Americans," said Jay Williams, who has been a consultant for many top Republican politicians. "But the storyline that Republicans today are stopping Black people from voting is ludicrous. Voter turnout has increased in each of the last three elections, and that includes minority voters. There's nothing nefarious about these laws."

Named after a Black minstrel show character, Jim Crow laws - and their predecessor, the Black Codes - were first enacted across the American South after the Civil War ended in 1865. After winning the war, the U.S. government passed amendments to the Constitution that guaranteed previously denied rights to the formerly enslaved.

Strict local and state laws, however, sought to infringe on those rights by putting restrictions on Black Americans' ability to get a job, receive an education and even to vote.

"Laws were passed that required you pay a poll tax to vote," explained Matthew Stuart, a history teacher in the suburbs of Jackson, Mississippi. "Requiring payment to vote is already terrible, but if you simultaneously pass laws that limit where you can work or how much you can get paid, that makes the tax even more of a barrier."

"Of course, that's going to prevent African Americans from voting, because they were also passing laws that made it harder for them to get an education."

Hate groups such as the Ku Klux Klan were founded during this period, allowing white Americans to retain anonymity while victimizing and suppressing the rights of newly freed slaves.

"Jim Crow lasted approximately 80 years between the end of post-Civil War Reconstruction and the passage of the Voting Rights Act of 1965," Stuart said of the federal legislation that finally outlawed the discriminatory voting practices adopted across the South. "But I only get to spend three weeks with my students on the entire period."

To Stuart and many others, spending so little time on an era that continues to create discord today is a missed opportunity for learning and reflection. "We practically skip from the Civil War to the civil rights era, and we look at its heroes like Martin Luther King Jr., and we feel good about how far we've come," Stuart said. "But those 80 years are what made the civil rights era possible. It's a generation's entire life. And just because it's uncomfortable doesn't mean we shouldn't address it."

Blair Condoll, a political science professor at Dillard University, a private, historically Black liberal arts college in New Orleans, is also a lawyer and a constitutional scholar who spends four hours every morning talking politics on his daily radio show.

Why Jim Crow continues to affect American life, particularly in Southern states like Louisiana, seems obvious to him.

"Of course, there are still effects between Jim Crow and slavery before it. That's hundreds of years of this society having two tiers - one for white Americans and another for Black. We can't just erase that in a generation or two," Condoll told VOA.

Carter agreed, adding that even though it's no longer codified in law, the enduring legacy of the Jim Crow era in his daily life remains obvious.

These disparities occur, Carter said, because Black Americans often lack the political clout to stop them. And that, he said, is because politicians use their power to make it harder for Black people to vote, rather than easier.

In the 2013 Shelby v. Holder case, the Supreme Court ruled that a key portion of the 1965 Voting Rights Act - Section 5, which previously required Southern states to have any changes to state voting laws approved by the attorney general - was no longer necessary.

"Why should Georgia need federal approval of its voting laws while New York doesn't? That doesn't seem fair to me," he said.

To Carter, the answer to that question couldn't be more obvious.

"For more than eight decades - and until not that long ago - states like Georgia passed voting laws that disenfranchised Black voters," he explained. "In fact, they just passed a law making it harder to vote that would never have been approved if the Voting Rights Act was still fully intact."

FILE - Republican Governor Brian Kemp signs S.B. 202, legislation that activists have said will curtail the influence of Black voters, in this handout photo posted to Kemp's Twitter feed on March 25, 2021.

There is a push among congressional Democrats to reform the election system and protect against the actions of individual states. Condoll believes that because the right to vote is guaranteed by the Constitution, the federal government has the authority to create one standardized set of rules and regulations.

"There are certain times it doesn't make sense to have different laws in every state," he said. "Voting is one of those times. For hundreds of years, and all the way through Jim Crow, we've seen that states don't protect everyone's rights equally. It's time we learned our lesson and protect the right to vote."