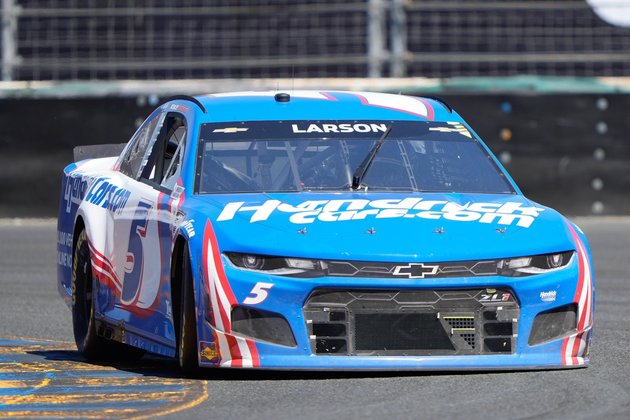 THIS WEEK: The series is back at Road America for the third race in two weeks before the next event at Mid-Ohio on July 4 and then it's a month off to give way to the Summer Olympics. ... Winners last weekend at the twin bill in Detroit were Sweden's Marcus Ericsson with his first career win on Saturday and Mexico's Pato O'Ward on Sunday for his second of the season. ... Road America opened in 1955 and has been hosting major events ever since with the IndyCar Series coming in 2016. ... Long for a road course at just over four miles, fuel management can be an issue, but there is no shortage of places to pass. ... New Zealand's Scott Dixon and Sweden's Felix Rosenqvist won here last year on a July double-header weekend. O'Ward leads the standings (299 points) in a Chevrolet-powered Dallara, with Spain's Alex Palou in his Honda-powered Dallara (298 points) second, followed by Dixon (263) in his Honda, Josef Newgarden (248) in a Chevy, with Belgium's Rinus Veekay in a Chevy and France's Simon Pagenaud in a Chevy tied at 243 rounding out the top five.

THIS WEEK: The French Grand Prix is back after taking last year off for the pandemic, and it will be its second time back at Circuit Paul Ricard since 1990. ... This will be the seventh of 22 scheduled races this season. ... The circuit has a long straight (Mistral) broken up by a chicane, but all eyes will be on Turn 10 (Signes), a right-hand sweeper that drivers will attempt to take flat out if they want to hold position. ... Sergio Perez of Mexico was the surprise winner at Azerbaijan two weeks ago. ... Belgium's Max Verstappen (105 points) leads the standings in his Red Bull, followed by Great Britain's Lewis Hamilton in a Mercedes (101), Perez (69) in a Red Bull, Britain's Lando Norris (66) in a McLaren Mercedes and Monaco's Charles LeClerc (52) in a Ferrari rounding out the top five.

THIS WEEK: The hot rods are off after a weekend in New Hampshire and will get back in action June 24-27 at Norwalk, Ohio, for the Summit Racing Equipment NHRA Nationals. ... Winners at Epping, N.H., on Sunday were Billy Torrence in Top Fuel, John Force in Funny Car and Aaron Stanfield in Pro Stock. Pro Stock Motorcycle had the weekend off but will race in Norwalk. ... Steve Torrence leads the Top Fuel standings (606 points), followed by Antron Brown (444) and Billy Torrence (391). ... Bob Tasca III hung on to the lead in Funny Car (495) again, with Force (480) jumping up a spot past J.R. Todd (450). ... Greg Anderson leads Pro Stock (543), with Stanfield (438) and Mason McGaha (402) behind him. ... Matt Smith (377) leads the Motorcycles, with Scotty Pollacheck (316) and Steve Johnson (303) giving chase.