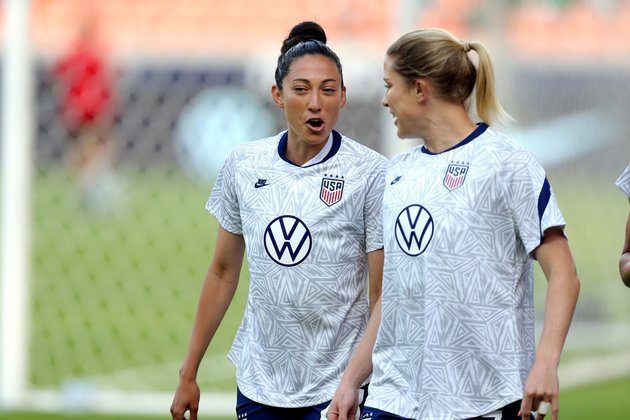 Christen Press and Lynn Williams scored as the U.S. women's national team christened Q2 Stadium in Austin, Texas, with a 2-0 win over Nigeria on Wednesday.

Goalie Tochukwu Oluehi kept the Nigerians in the match with the best of her four saves on a Press' shot from 12 yards in the 85th minute, but Williams later got behind the defense and dribbled around the goalkeeper for her 11th international goal.

Alyssa Naeher made one save for the U.S. while recording her 42nd shutout and 13th in her past 14 games.

The match was the last of three since June 10 that were the final determinants before coach Vlatko Andonovski announces his roster of 18 players and four alternates for the Tokyo Olympics.

He will then take his team to play Mexico in East Hartford, Conn., on July 1 and July 5 in the final matches prior to opening the Olympic tournament on July 21 vs. Sweden.

Press scored the first goal in Q2 Stadium, the $260 million, 20,500-seat home of Austin FC, the Major League Soccer expansion team that makes its home debut against the San Jose Earthquakes on Saturday.

She provided the breakthrough score thanks to an assist from Carli Lloyd, who took advantage of a weak clearance to deftly poke the ball ahead to Press.

Press was the top of the box for a first-touch strike that curled to the far post for her 61st international goal, breaking a tie with Shannon MacMillan to move into ninth on the all-time USWNT list.

The U.S. struggled to finish its opportunities, much like its match against Portugal on June 10 when Sam Mewis scored in the 76th minute for a 1-0 win.