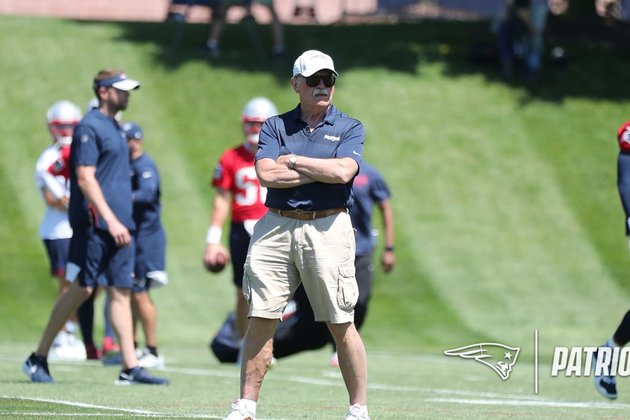 FOXBOROUGH, Mass. - A gold watch? Not for this guy, who's helped the Patriots win a half-dozen gold and diamond Super Bowl rings. But for someone who's eschewed the limelight his entire career, Ernie Adams became the center of attention on his last day at work.

Back in early May, on the final day of the 2021 NFL Draft, head coach Bill Belichick revealed that his longtime friend and colleague would be stepping away from the game after several decades by Belichick's side. The duo first met at prep school and have been virtually inseparable ever since.

"Ernie's been a great friend... certainly been a great asset to this organization and to me personally," Belichick remarked to reporters during his daily Q&A session. "A lot of the things that he's done have also been recognized by other coaches and other staffs in the league and a lot of people that are doing things that he does for different organizations. Some of the things that he really... started and uncovered and showed the value of them here, his versatility and ability to do so many different things and his passion for football are really second to none."

Afterward, on this final day of New England's three-day mandatory minicamp, Belichick turned over his seat on his daily video conference with reporters to allow Adams a few minutes of Q&A time with the media.

"It's been incredible," he said of his improbable career in the NFL. "If you told me when we started [here in New England] that it'd be 21 seasons with nine Super Bowls, I'm not sure I would have believed you, but we just grinded it out one day at a time and that's what it's been. You know, I tell people I have a really hard life. I live in the place I want to live and well, winning a lot of football games, it's hard to beat that."

With the exception of a brief stint as a stock trader in New York early on, Adams has spent almost all of his adult life working in professional football alongside Belichick. He coached football for a few years at Northwestern University in the 1970s before getting his NFL start right here with the Patriots in 1975.

Adams later reunited with Belichick when the two joined the New York Giants' staff in 1979. Eventually, Adams' roles with Belichick's 1990s Cleveland Browns and again with these Patriots focused less on actual coaching and more on... well, even today, it's difficult for anyone not directly involved with him to define what exactly Adams does. The outgoing Football Research Director (Adams' official title with the Patriots) had some fun with this when the subject was broached again Wednesday.

"Well, I don't think I'm a 'man of mystery,'" Adams mischievously grinned, "particularly inside the organization with the people I work with."

On the rare occasions when Adams has been in front of a camera, he's made an indelible impression. Famously, during the Do Your Job documentary recapping Super Bowl XLIX, Adams was interviewed with the words "Pink Stripes" written on the white board behind him, leading to widespread speculation among football afficionados about what the phrase could mean.

"Well, I go back to my Wall Street days," Adams quipped, "when everything we did we said was proprietary trading information. So, I'll leave it at that's strictly an inside joke and proprietary football information.

"Basically," he acknowledged, "my job is to figure out as many things as I can to help the New England Patriots win football games. So, whether it's strategy, personnel or anything else. The thing that's been great about my job, is I've never really had any constraints put on me. I could go in any area I thought would help us and hopefully I've made some positive contribution."

At the conclusion of Wednesday's practice, Belichick gathered his team on the practice field to bid a final professional farewell to Adams.

"We'll miss him," the head coach admitted, "but always welcome him back. Hopefully, he'll come back and visit us."

Would Adams consider doing any one-off or freelance assignments for New England in the future? Ever the taciturn Patriot to the end, Adams would only say with a smile, "Bill has all my contact information."