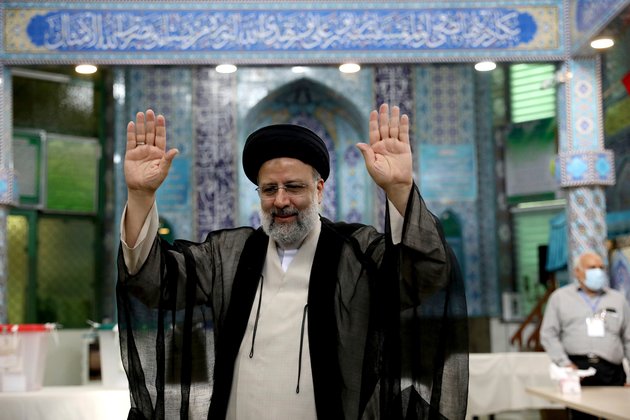 Voters in Iran are going to the polls Friday to elect a new president. But voter apathy is running high as the Middle Eastern country experiences a coronavirus surge and an economy devastated by U.S. sanctions.

Multiple candidates have withdrawn from the race or been disqualified in the lead-up to the Friday poll.

Wednesday, two hardline candidates withdrew from the race, giving their support to another hardliner -- Ebrahim Raisi, the head of Iran's judiciary. Former Central Bank chief Abdolnasser Hemmati, the other remaining politician in the race, is a reformist candidate.

Political analysts say the likely winner will be the 60-year-old Raisi, who has the support of Supreme Leader Ayatollah Ali Khamenei. Rasi's past involvement in human rights abuses would make him a problematic president for the West, according to Iran analyst Behnam Ben Taleblu of the Washington-based Foundation for the Defense of Democracies.

"He's unfortunately most famous for his despicable oversight of what is called a so-called death commission in the late 1980s that carried out the murder edict from Ayatollah Khomeini, that killed upwards of 5,000 political prisoners in Tehran," Taleblu said.

Khamenei has encouraged the country's 59 million eligible voters to go to the polls, warning Iranians of a foreign conspiracy to undermine the vote. All candidates were approved and vetted by the Iranian regime's Guardian Council.

Iran has been rocked by a series of events that have shaped the electoral landscape. The targeted killing of Iranian General Qassem Soleimani in January 2020 by a U.S. drone strike prompted widespread public fury. Days later, Iranian forces accidentally shot down a Ukrainian passenger jet, resulting in the deaths of all 176 onboard. The incident prompted anti-government protests in several cities.

"So, there have been a cycle of interconnected events that have dampened popular sentiment, and in November 2019, protests over rising oil prices were also brutally repressed. So, ordinary Iranians are not particularly inclined to vote," Sanam Vakil, deputy head of the Middle East and North Africa program at London-based Chatham House, said in an interview with VOA.

Iran has significantly ramped up its nuclear enrichment since the United States left the 2015 accord, known as the Joint Comprehensive Plan of Action, or JCPOA. Iran is believed to be just months away from creating enough fissile material for a nuclear weapon. The U.S. is considering rejoining the 2015 nuclear deal, but only if Iran halts enrichment. Iran says the U.S. must first suspend sanctions. Talks in Vienna are ongoing.

"The lifting of sanctions would be a huge boon that could have a trickle-down effect, that would be hugely meaningful for ordinary people. That said, I think Iranians today are less invested in the Iran nuclear agreement and less trustful of the United States or European countries," Vakil said.

All of Iran's presidential candidates support negotiations to revive the nuclear deal.