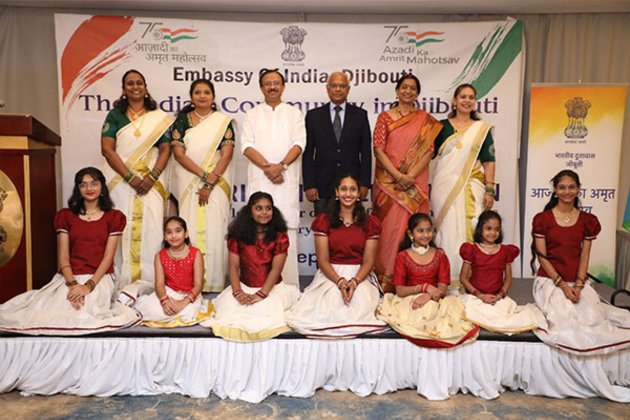 Djibouti City [Djibouti], September 22 (ANI): Minister of State for External Affairs and Parliamentary Affairs V Muraleedharan on Thursday interacted with the Indian community in Djibouti and briefed them on the government's policies and programmes for all sections of the Indian society.

In his address, he highlighted Prime Minister Narendra Modi's "Panch Pran" (five pledges) for a developed nation and aim to fulfil the dreams of the freedom fighters by the year 2047 -- the 100th year of India's Independence.

"Pleasure interacting with the active Indian community in Djibouti. Apprised them of India's progress in diverse fields. Briefed them on government's policiesprogrammes for all sections of the Indian society," Muraleedharan tweeted.

"Highlighted PM @narendramodi ji's Panch Pran for New India during the Amrit Kaal. An India: that is developed; free of colonial mindset; proud of its heritage; unitedintegrated;whose citizens put duty above all," Muraleedharan wrote.

Besides, Muraleedharan also visited the Mahatma Gandhi Center for Leadership and Entrepreneurship in Djibouti, built with India's assistance. He offered floral tributes to the statue of Mahatma Gandhi installed there.

"Visited Mahatma Gandhi Center for LeadershipEntrepreneurship in Djibouti, built under India's assistance. Offered floral tributes to the Statue of Mahatma Gandhi installed there. Happy to be received by H.E. Mrs. Mariam Hamadou Ali, Minister of Digital EconomyInnovation," the minister tweeted.

MoS Muraleedharan is on a two-day visit to the Horn of Africa nation. He arrived in Djibouti on Wednesday. It is the first ministerial visit from India after a resident embassy opened in Djibouti.

India and Djibouti share warm and friendly relations underpinned by historical and cultural linkages. Djibouti extended extraordinary support in the evacuation of Indian nationals from war-torn Yemen in 2015 (Operation Rahat).

Under Operation Rahat, India evacuated nearly 5,600 people from Yemen. In 2015, a conflict raged between the Yemeni government and Houthi rebels. A sizeable Indian community is living in Djibouti.

The visit of MoS Muraleedharan is expected to provide further momentum to the bilateral ties between India and Djibouti. (ANI)