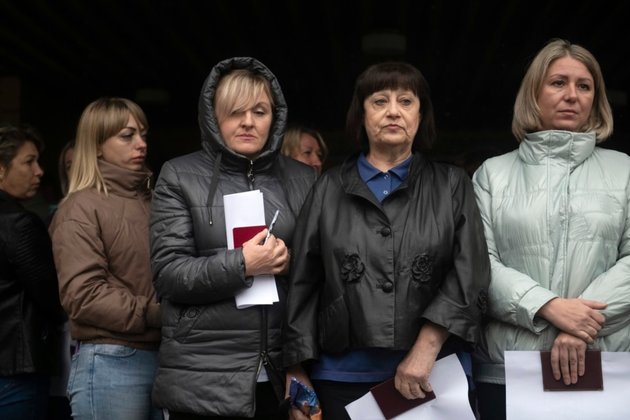 Western nations and Ukraine say voting is a sham that began Friday on Russian referendums aimed at annexing four occupied regions of Ukraine. Some local officials said voters were being intimidated and threatened.

In the balloting, scheduled to run from Friday to Tuesday in the provinces of Luhansk, Kherson and the partly Russian-controlled Zaporizhzhia and Donetsk regions, voters are being asked if they want their areas to become part of Russia.

Polls also opened in Russia, where refugees and other residents from those areas could vote.

The West and Ukraine said the voting is illegal under international law.

"Any elections or referenda on the territory of Ukraine can only be announced and conducted by legitimate authorities in compliance with national legislation and international standards," the Organization for Security and Cooperation in Europe a said in a statement. "Therefore, the planned 'referenda' will be illegal."

Ukrainian officials said people were banned from leaving some occupied areas until the vote was over, armed groups were going to homes to force people to cast ballots, and employees were told they could be fired if they did not participate. 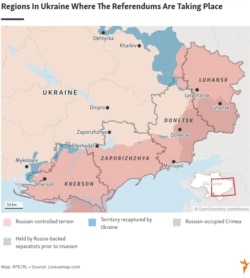 Serhiy Haidai, Ukraine's Luhansk governor, said in the town of Starobilsk, the population was banned from leaving and people were being forced out of their homes to vote.

'Today, the best thing for the people of Kherson would be not to open their doors,' said Yuriy Sobolevsky, the displaced first deputy council chairman of Kherson region.

The results of the referendums, expected soon after the voting, are almost certain to support joining Russia.

'We are returning home,' said the Russian-backed leader of Donetsk, Denis Pushilin. 'Donbas is Russia.'

'All of us have been waiting for a referendum on joining Russia for eight long years,' said Leonid Pasechnik, the Russian-backed leader of Luhansk. 'We have already become part of Russia. There remains only a small matter - to win [the war].'

Ukraine says it will never accept Russian control of any of its territory.

The referendums were quickly organized after Ukraine earlier this month recaptured large swaths of the northeast in a counteroffensive.

By incorporating the four areas, Moscow could portray attacks to retake them as an attack on Russia itself - potentially even using that to justify a nuclear response. 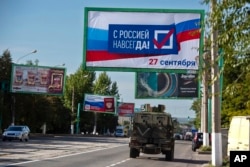 A military vehicle drives along a street with a billboard that reads: 'With Russia forever, September 27', prior to a referendum in Luhansk, Luhansk People's Republic, controlled by Russian troops and proxies, eastern Ukraine, Sept. 22, 2022.

In a televised address this week, Russia's President Vladimir Putin said the West is trying to weaken and destroy Russia and that his country will "use all the means at our disposal to protect Russia and our people."

With Putin's announcement that he intends to call up 300,000 more troops for his "special military operation" in Ukraine, the Kremlin appears to be trying to regain the upper hand in the grinding conflict.

Russia's mobilization campaign is not likely to generate effective soldiers and is creating a public backlash, according to a report by the Institute for the Study of War.

The head of a U.N.-mandated investigation body said Friday war crimes including rape, torture and confinement of children have been committed in Russian-occupied areas of Ukraine.

'Based on the evidence gathered by the commission, it has concluded that war crimes have been committed in Ukraine,' Erik Mose, who heads the Commission of Inquiry on Ukraine, told the U.N. Human Rights Council in Geneva.

He did not specify who was to blame but the commission has focused on areas previously occupied by Russian forces, such as Kyiv, Chernihiv, Kharkiv and Sumy. 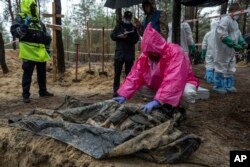 A forensic expert examines the body of a civilian during exhumation in the recently retaken area of Izium, Kharkiv region, Ukraine, Sept. 23, 2022.

Investigators from the commission, created by the rights council in March, visited 27 places and interviewed more than 150 victims and witnesses.

They found evidence of a large number of executions, including bodies with tied hands, slit throats and gunshot wounds to the head, Mose said.

He also noted investigators had identified victims of sexual violence who were between the ages of four and 82. While some Russian soldiers had used sexual violence as a strategy, the commission 'has not established any general pattern to that effect,' Mose added.

A U.S. envoy told the council, 'Numerous sources indicate that Russian authorities have interrogated, detained and forcible deported between 900,000 and 1.6 million Ukrainian citizens."

U.S. Ambassador Michele Taylor, U.S. permanent representative to the council added, 'We urge the commissioners to continue to examine the growing evidence of Russia's filtration operations, forced deportations and disappearances."

Russia was called on to respond to the allegations at the U.N. Human Rights Council meeting but its seat was left empty. There was no immediate official reaction from Moscow.

Some information for this report came from The Associated Press and Reuters.