Cape Town, South Africa - South African conservationists are on high alert after an outbreak of bird flu killed close to 30 penguins at one of the country's most stable colonies and a popular tourist attraction.

The disease, formally known as avian influenza, is untreatable and has already killed more than 20,000 Cape cormorant birds since last year.

Boulders Penguin Colony, about a 40-minute drive from Cape Town's city center, is home to about 3,000 African penguins - a significant number given there are only about 14,000 breeding pairs left on the planet.

Bird flu was identified in the colony in August.

Dr. David Roberts is a clinical veterinarian who works for the Southern African Foundation for the Conservation of Coastal Birds, an NGO which advises South African National Parks, the government entity that manages the colony. He said that, for now, tourists and beachgoers are still allowed.

"We don't think there's any extra threat caused by people visiting," he said. "If there's more of an outbreak, then other measures might be put in place."

The disease is typically spread between birds by feces. Roberts said rangers are on the lookout for sick birds.

"Because this is an untreatable disease, we don't take them in and give them medication, we'd rather euthanize them," he said. 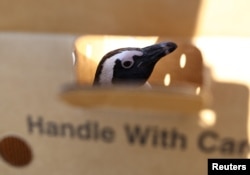 FILE - An African penguin is seen in a box after it was injured at Cape Town's Boulders penguin colony in Cape Town, South Africa, Sept. 28, 2022.

There are concerns that the bird flu could spread to ostriches and chickens, which would have dire economic implications.

As far as spreading to humans, the U.S. Centers for Disease Control's website said illness in humans from bird flu virus infections are rare and have ranged in severity from no symptoms or mild illness to severe disease that resulted in death.

Roberts said the H5N1 strain present in South Africa has a low probability of being transmitted to mammals.

"It is a threat that we know is real and we're concerned about that possibility but it's a very low probability at the moment," he said. "But we still encourage people not to interact with sick animals, sick birds or to interact with dead birds either."

Roberts said if people do find sick, injured or dead birds they should find somebody who is trained to respond appropriately.

Azwianewi Makhado, the seabird specialist scientist at the Department of Fisheries, Forestry and the Environment, said the department has a bird security policy for any staff handling penguins in the colonies.

"Clothes that you wear when you enter the colony should be taken off as soon as you come out and should not be worn again," Makhado said.

Authorities said they will post regular updates about the outbreak.