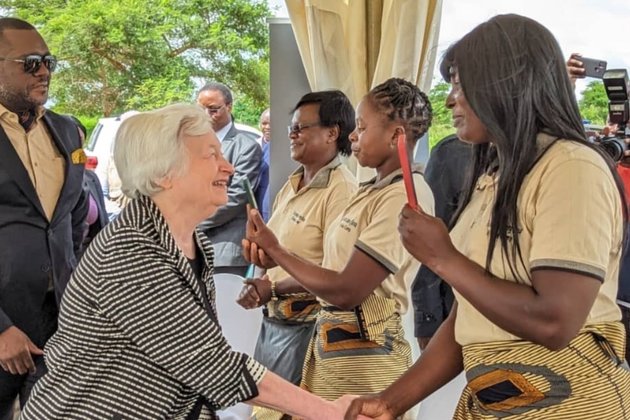 Lusaka, Zambia - On the final day of her visit to Zambia, U.S. Treasury Secretary Janet Yellen discussed climate-resilient food production and the global fallout from Russia's war on Ukraine.

On her second day in Zambia, Treasury Secretary Janet Yellen said hunger and food insecurity are exerting a heavy toll on communities around the world.

Secretary Yellen said it is for this reason the United States is taking strong and immediate actions to alleviate hunger.

Yellen spoke Tuesday in Chongwe, east of the Zambian capital, Lusaka, where she met with several female farmers through the green climate fund, which the U.S. is supporting through the United Nations.

The project - Climate Resilience of Agricultural Livelihoods in Agro-Ecological Regions in Zambia - is aimed at helping small-scale farmers better manage the impacts of climate change and alleviate hunger.

US Treasury Secretary Yellen Kicks Off Africa Tour in Senegal

She said the U.S. will work closely with African countries like Zambia to develop its infrastructure and logistics capabilities.

She underscored the African continent needs a robust capacity not only to grow food, but to ensure it can be cultivated, stored and efficiently transported.

"And this difficult situation has been exacerbated by Russia's illegal war on Ukraine, which has further stressed fuel and fertilizer prices across the world," she said.

Secretary Yellen was accompanied to Chongwe by Zambia's acting agricultural minister, Gary Nkombo, who expressed gratitude for the U.S. support to Zambia. Nkombo said about 150 families have benefited from the U.N.-led program in Chongwe, which focuses on conservation farming.

Last month, more than 40 African leaders met with members of the U.S. administration in Washington, which pledged to strengthen investments between Africa and the U.S.